In 1977, Nelson United made history by winning the Chatham Cup for the first time. Jon Enoka was captain of the side and scored the crucial penalty kick in a tense final in front of a parochial Auckland crowd. The memories of that day still loom large in John’s mind 43 years later.

“We couldn’t wait for that final whistle, it was incredible, to see the faces, the joy and excitement, it meant so much to us,” John, now based in Australia, says.

Nelson were written off by almost everyone prior to the final.

“We were complete underdogs, no one gave us a chance.”

That tag was justified too, with their opponents Mt Wellington boasting no less than six All Whites.

“People talk about luck, yea we were lucky, but you have to make your own luck, we made ours by training hard and working together.”

Kevin Fallon had been brought in as head coach and valued fitness above all else.

“He loves the game, it’s been his life and he was a real hard taskmaster.”

As well as running on the beach, players were made to run the Grampians and the Centre of New Zealand.

“Not once or twice, but four or five times,” John laments.

However, the brutal training bonded John and his teammates.

John says Kevin had recruited smartly and assembled a quality squad with a mixture of exuberance and experience.

As well as John, Kenny Cresswell, Keith Mckay and Peter Simonsen were all brought in from the New Zealand U21 set up.

Welcoming these young bucks to the side were a number of local stalwarts including David Brydon, and John Slotemaker and 16-year-old Colin Chisholm.

“We had all the makings of a great team.”

John was 22 at the time and jumped across the Cook Straight from Stop Out in Lower Hutt to join Nelson.

Kicking off its Chatham Cup campaign with a big 7-0 win over Whanganui, Nelson then came up against John’s former club.

Runners up in the nationals, Stop Out posed a huge challenge to United, however, Nelson managed to hold the hosts to a 1-all draw at full-time.

Nelson would go on to win the penalty shootout in what John says was a defining moment of the campaign.

“We had real belief after that.”

Next up was the Courier Rangers from Auckland, who were sent home from Rutherford Park after a 3-2 defeat.

That win set up a semi final showdown with powerhouses Christchurch Technical.

“The hardest thing was always going to be getting to the final.”

A tough 3-1 victory would give Nelson its shot at history against Mt Wellington, though few in the big city gave the southerners a chance.

“A lot of people were thinking it will just be another one for the Mount, but we knew we could do it, after all the work we had done through the season.”

John says though they lacked the experience and big names of their Auckland opposition, they weren’t daunted by the challenge.

“They had the skill, but we had faith in each other, we knew we could mix it with them fitness-wise, we had a super fit team.”

However, Nelson knew they would need to play out of their skins and have plenty of luck if they were to topple the hosts at Newmarket Park.

“They were always the team to beat, they set examples, everyone respected and looked up to them but we were going to get out there and give it our best shot.”

Luckily, goalkeeper Keith Barrett had the game of his life.

“He had a blinder, he was man of the match and rightly so.”

John recalls an exhausting first 45 minutes in front of a vocal Auckland audience.

The final was also televised with many of the Nelson players playing in front of cameras for the first time.

Mt Wellington peppered Nelson’s keeper throughout the half, but Barrett proved impenetrable.

“If they had scored one, they would’ve scored three or four but the shots he stopped were amazing.”

Thanks to Barrett’s heroics, the first half would end in stalemate.

“Kevin just said, ‘we survived the first half, the second has to be ours if we want to win this.’” 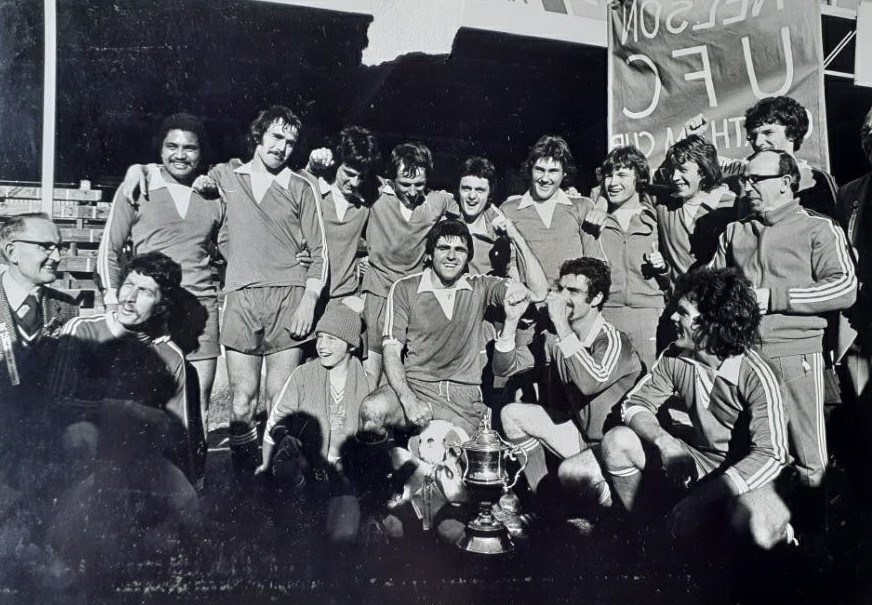 John says his side took a while to find its feet in the second, as the excitement in the arena built.

Then, in the 60th minute, it happened.

“I’ve never managed to watch the replay, but it was a bit dodgy, even to this day some of the guys have been trying to get a copy but no one’s been able to find it.”

Whether warranted or not, Nelson now had a chance to take the lead.

Despite the pressure, John did not bat an eye as he strode forward and picked up the ball.

“I was confident, I’d taken a few penalties in my time and thought I will take it, being captain, I just made the decision.”

He says his teammate’s joke that there was no point in anyone else volunteering, John was taking the shot.

The young striker eyed up his spot at the back of the net and unleashed.

“It was always going to the goalkeepers right, he didn’t even see it, I hit it that hard, that quick.”

As the ball thundered into the goal John took off like a kid in a candy store.

“I went 100 miles around the whole park, my teammates could catch me, I was overwhelmed.”

With a 1-0 advantage, Nelson galvanised and set about defending with everything it had.

“When we scored, we got stronger, we knew we had to stick to our guns and make it hard for them.”

The Auckland side searched desperately for an equaliser, but the stubborn Nelson defence continued to deny them.

John says it was an agonising wait for the final whistle, but they were overcome with exhaustion and ecstasy when it eventually sounded.

“They were a great team, but the underdogs came through, it was our day.”

Players were eager to get back to nelson and celebrate so the club had arranged an old army plane to get them home that evening.

“We called it the boneshaker, it was a very dodgy flight but the alcohol helped.”

The side then landed at Nelson Airport to a hoard of fans.

“It was chokka, they had the Nelson band there, you couldn’t move in that airport, we felt like heroes.”

John says to repay club members and fans with such a prestigious trophy was incredibly satisfying.

“It was a nice feeling to pay them back for all the work they put in, it was always hard in those days financially, and to be able to give something back to all those that would turn up on a Sunday to cheer us on.”

The celebrations went long into the weekend and John jokes were almost as draining as the match itself.

Having maintained the core of its squad, Nelson enjoyed similar success in 1978, hosting the Chatham Cup final at Trafalgar Park.

However, in an ironic reversal of fortunes, it was Nelson who was upset 1-0 by Manurewa.

John says while he stays in contact with the majority of the team, they are yet to have a proper reunion.

“I would love to have a catch-up and a friendly game.” 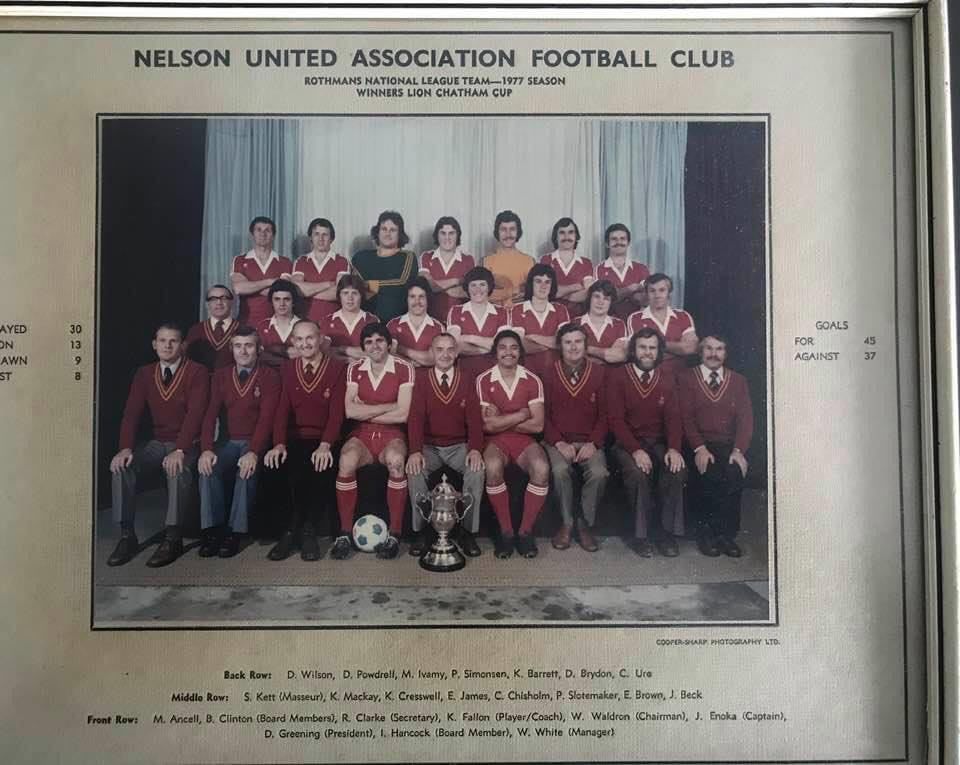