Mark Milne amassed more than 100 caps and scored more than 50 tries during his 13-year career with Nelson Bays. Mark was part of a dominant Nelson side, played in several famous victories and helped pave the way for the Tasman Mako success today. However, there was one moment where Mark had the chance to go from Nelson Bays rugby legend, to immortal.

It was the first winter of the new millennium and the Scotland rugby side was in town to take on the second division NPC champions, Nelson Bays.

The city was buzzing with excitement as its beloved rugby side had a realistic shot of knocking over a top tier international team for the first time.

It was a typically gorgeous winter afternoon in Nelson as a healthy crowd packed into Trafalgar Park with hopes of witnessing history.

In an unprecedented move at the time, players opted to sit out Saturday’s club games in order to be prime for the Scots on the Tuesday.

Veteran fullback Mark Milne says they were quietly confident in the buildup.

“We had a good side, we were well coached, we thought we could give them a bit of a fright.”

Nelson did just that, dominating Scotland early on, taking a 5-0 lead after a try to Kelvin Heiford.

The Scots fought back thanks in a large part to its star player and current national coach, Gregor Townsend.

However, Mark soon stole back the lead with a try of his own down the right-hand flank which he duly converted, before going back to back with a long-range effort for his second.

The visitors clawed their way back to take a 25-20 lead with just minutes remaining, but Nelson weren’t done yet.

With time ticking away, centre Joe Faaiu broke through the Scottish defence and brushed off three tackles before crashing over to equal the scores.

Having already bagged 15 points, Milne lined up his kick just to the left of the uprights,

The Nelson faithful watched with bated breath as they prepared to celebrate an historic occasion.

“I realised it was an opportunity to beat an international side,” Mark says.

Nelson Bays had previously knocked off Tonga in 1969 and Italy in 1980, but a scalp against a Six Nations side would almost erase memories of the 83-0 drubbing at the hands of South Africa in 1981.

“I was just thinking ‘I want to get it over.”

He eyed up the posts at the town end of Trafalgar and swung his trusty left boot.

However, the conversion attempt was hooked to end the game in a 25-all draw.

“Maybe I was a bit casual and the technique went out the window, but I just shanked it.”

The now 49-year-old recalls that the team’s regular kicker Warren Johnson was off the park injured.

“I’ll blame Wazza because he was our kicker, I was just the accidental one,” he jokes.

Now two decades on, Milne says the moment still lingers in his memory. 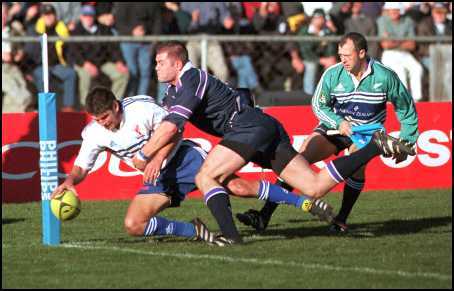 Mark Milne dots down during Nelson Bay’s draw with France at Trafalgar Park in 2000. Photo: Supplied.

“I can’t remember too much of the game, but I obviously remember the end. At the end of the day I stuffed it up, I was a bit of a muppet really, the team deserved it, the way we had played since ’98, it would have put the icing on the cake.”

Following the final whistle, Mark faced up to the Scottish press.

It was a foreign experience for the Nelson man.

“There were a whole heap of the buggers which was a bit weird for a boy from Nelson but they were pretty fair on me which was lucky because I wasn’t feeling too good at the time, I felt that I had let the boys down.”

To put in perspective how amateur the side was, by the time Mark had finished fielding questions, Nelson’s openside Graeme Ching was off to work to do his night shift driving a log truck.

Despite the draw, Mark says he takes pride in the result.

“We were the underdog, had no pressure and nothing to lose and I think we played like that.”

As well as his two tries, penalty goal and conversion, Mark also had two tries disallowed.

“I reckon I definitely scored one of them, if you take the kick out of it, I felt it was one of my better games in a Nelson Bays jersey.”

Mark says he beat himself up for a while following the game, but not nearly as mercilessly as opposition club players did.

“I remember the Marist boys the next Saturday giving me a bit of hard time when I was taking shots at goal. Luckily that day I think we got the wood over them”

People still mention the miss to Mark on occasion, but he likes to remind them they were playing with the infamous yellow Adidas ball.

Introduced in early 2000, the ball was highly criticised by many for its poor performance including the All Blacks second highest point scorer.

“A bad tradesman blames his tools but whenever someone gives me a hard time about it, I mention that Andrew Mehrtens slagged the ball all of that year. He said it was a pig of a ball, so I’ve always hung my hat on that.”

Mark retired from playing in 2002 but has remained heavily involved in the club game after carving out a stellar career for his province.

After being plucked from Waimea B to make his Nelson Bays debut in 1991, Mark became a stalwart of the side and a record holder for points and tries scored and featured in third and second division championship victories.

However, Mark will always lament the two he missed that day, denying him a place in rugby folklore and the chance to drink for free in Nelson the rest of his life.

Getting a buzz out of bees