When the McDougall brothers pack down a scrum it is not only their club’s pride on the line, but their family’s too.

In what is a first in the club’s 75-year history, Marist are fielding four brothers in one team and they happen to wear numbers one to four on their backs.

Duncan, Isaac, Patrick and James McDougall all play for the division two side as prop, hooker, prop and lock respectively.

They say being in the front row adds that bit of extra pressure.

“If you get smashed in the scrum, a little bit of your manhood is gone, but with three of us, if we get demolished its family pride lost as well,” says Isaac.

Isaac says the last thing they want is for opposition to be able to say, “we dominated those McDougall boys today,” but thankfully that has yet to happen.

The sibling rivalry translates well to the footy field.

The brothers say whenever they need to pair off for drills, they are sure to partner up with each other.

“It makes you go a little bit harder and push each other a little bit further, you feel a bit awkward if you tackle someone a bit too hard at training but it doesn’t really matter if it’s your brother,” says Duncan.

Duncan says they don’t hold back against one another.

“Any injury I’ve had at training is normally from them.”

Having all grown up together in Nelson, many are surprised to hear it wasn’t until 2019 that the brothers all played together. 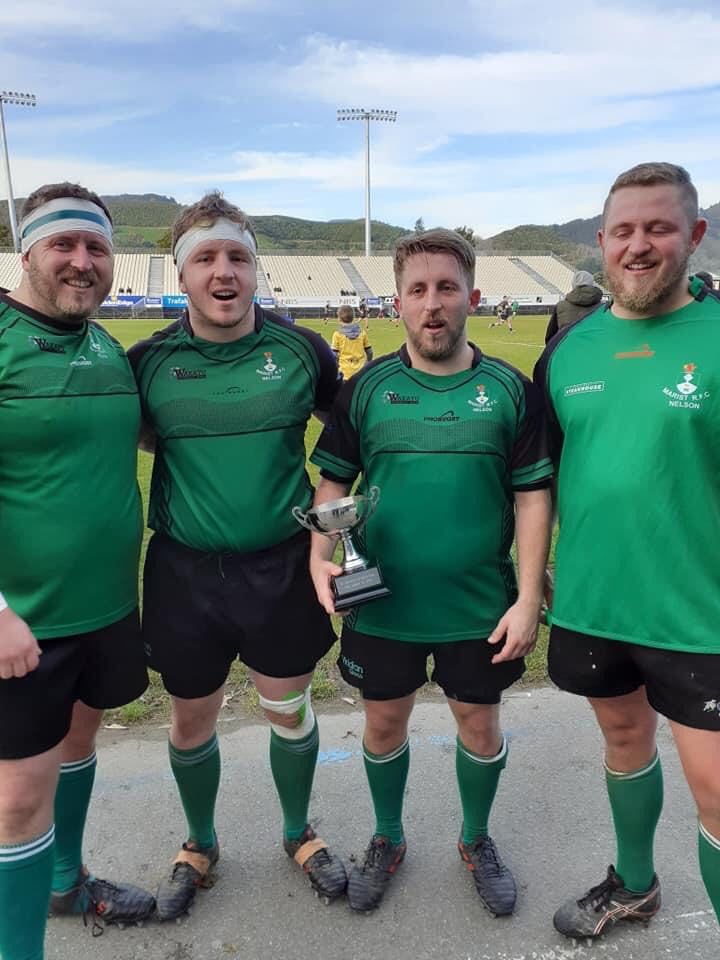 James, Duncan, Isaac and Patrick posing with the Kyle Post Trophy after their very first match together. Photo: Supplied.

Patrick and Isaac both grew up playing soccer before switching codes in their 20’s while Duncan was formerly a 70kg winger before his big brothers brought him into the engine room.

The stars finally aligned for the quartet last season as the McDougall’s all ran out for Marist to take on Nelson for the Kyle Post Trophy.

“There was a lot of hype around it which made it pretty special, there were posts on Facebook encouraging friends and family to come down and support us,” says Isaac.

The trophy holds special significance for the brothers, two of them having played with Kyle the week before he passed away.

In a memorable first outing together, Marist managed to get the win, with the McDougall’s saying they felt a combination of excitement and exhaustion at the final whistle.

“None of us wanted to be the first one to give up,” says James.

The trophy was again on the line on Saturday with Marist retaining 48-19.

James says the bond between the brothers extends off the field too.

“We all hang out with each other socially which is quite cool, we’re pretty tight,” says James.

The most experienced player Patrick says he hopes his old bones will hold together long enough to get a few seasons playing with his brothers and win what has proven to be an elusive second division title.

“We finished fourth equal last year to just miss the semis, we just want to win a f****** trophy.”

Soldiers to march through Nelson