The Nelson Covid-19 patient who was previously critically ill and on a ventilator is now in a stable condition in ICU.

The Nelson Marlborough District Health Board yesterday confirmed no new cases of the virus in the region.

This keeps the total number of confirmed and probable cases at 22 in the Top of the South – 12 in Nelson and 10 in Marlborough.

All cases are travel-related and there is no evidence of a community outbreak in the region. Twenty of the cases are in isolation at home or in their place of usual residence. Two cases are in hospital – one in Nelson Hospital and one in Wairau Hospital are both now in a stable condition.

More than 500 of people have been screened, assessed and tested in the region. For further information please go to the NMH website COVID-19 page.

Meanwhile, the Government wants more testing for Covid-19 in regions with low confirmed cases before deciding whether some could have conditions of the lockdown eased, says Prime Minister Jacinda Ardern.

With yesterday marking a week since the lockdown began, Ardern praised the majority of New Zealanders for their “amazing” response.

But she has given young New Zealanders a stern lecture to follow the rules, saying they were the largest group of carriers.

“This isn’t about ‘other’ and it’s not about someone else, it’s about you and your family and that includes every age demographic there is.”

Ardern indicated that the Government did not have sufficient data on community transmission to decide whether to lower the alert levels in some regions.

“To make those calls we need to make sure we have enough tests.”

Ardern said that in areas across the country where testing had been low, the Government needed to be sure “we have enough data and enough information to really make a clear judgment, that we actually don’t have community transmission there – and we might be in a position, for instance, to change alert levels for those different regions.” 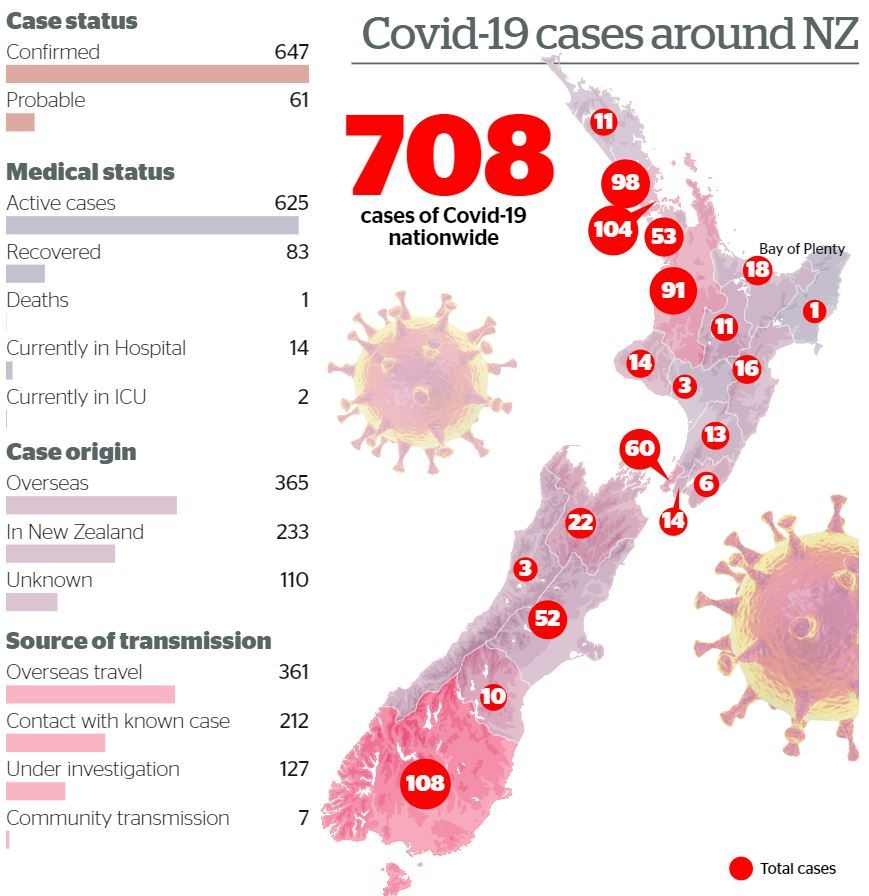 New Zealand is in alert level 4, with all but essential services closed or working from home.

People are urged to stay at home to break the chains of transmission of the highly contagious virus while health professionals test, identify and isolate confirmed cases.

Criteria for testing was extended for a second time this week and testing capacity will soon be at 5000 a day, Health Minister David Clark said yesterday.

The District Health Boards with the lowest number of confirmed cases are Tairawhiti (East Coast) with one, Whanganui and West Coast each with three and Wairarapa with six.

The only death so far in New Zealand was on the West Coast, Anne Guenole, aged 73, whose family are mystified as to how she got it.

The Ministry of Health yesterday reported 47 new confirmed cases and 14 new probable ones, taking the total confirmed and probable cases to 708, 61 higher than the previous day.

It reported that 16 people were in hospital, two of them in intensive care but in a stable condition, and that 82 people had recovered.

Those who wished to exercise should stay local and maintain physical distancing of 2 metres at all times.

Ardern pointed out at her daily press conference yesterday that the age cohort with by far the highest number of cases was the age group 20 to 29 as follows:

Ardern said that while the majority of New Zealanders were doing an amazing job during the lockdown “we just need to keep reminding that small proportion who perhaps aren’t taking it seriously why it is so important”.

In the Nelson region, if you need urgent welfare assistance during the COVID-19 shutdown Nelson Tasman Civil Defence has set up a new 0800 phone number.

The support service is for people who do not have friends, family or neighbours who can provide assistance.