After proving itself as the country’s premier provincial side, the Tasman Mako have had a taste of international competition in the United States.

The Mitre 10 Cup champions recently embarked on a two week tour to Houston and Seattle for two exhibition games.

With majority of the Mako squad on Super Rugby duty, it was the perfect chance to blood some wider squad members

Vice captain Jamie Spowart was given a leadership role which he relished after limited game time in 2019.

“It was a really good opportunity for me to step up,” the young speedster says.

The Mako first met the Houston SabreCats at Aveva Stadium in Texas.

“It was the first time for some of the boys playing at that level and they did awesome.”

Next up for the Mako was the physically imposing Seattle Seawolves.

“Their size overwhelmed us, when you have players that big constantly running at you they eventually break you down.”

“It was a bit gutting to get that second loss but they were a quality side and we left it all out there and showed them what New Zealand rugby was all about.”

Though they didn’t get the result, the Mako left a strong impression.

“They said they had never played against a brand like what we played.”

Jamie says he eventually came into his own as a leader.

“It was a bit different because I’m usually one of the quiet ones but I definitely enjoyed it and was more comfortable in the end, it was a great environment”

It wasn’t all business for the Mako on tour though as they got to enjoy a live NBA game as the Houston Rockets took on the Oklahoma City Thunder.

“That was definitely a highlight.”

Jamie says some of the boys might be bringing back a few extra kg after indulging in the local cuisine.

He says the reception they got from locals was surprising.

“I couldn’t believe how much they got into it, people would see us and ask us who we were and what we’re doing, rugby is quite popular in Seattle so fans were excited to see a team from New Zealand.”

He says he would be the first to put his hand up for future tours.

“It was such a good experience, the coaches were awesome and the teams hosted us really well, I would love to do it again.” 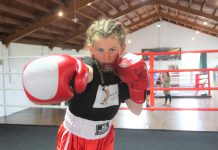 Aussie Heuir having a giant of a season