When Sandra Smith walked into the Nelson SPCA three years ago looking for a dog, she knew Nala was the one.

The timid four-month-old puppy was lacking confidence and frightened of everyday things.

But fast-forward three years and Nala has blossomed, thanks to plenty of love and patience from Sandra.

“I used to pop in regularly and look at pups – until I saw Nala. I thought, ‘that’s the one I want’. I love her. It’s just the two of us, so she’s become a lovely pet and dear companion.”

The pair love walking, so when Sandra heard about the SPCA’s Great NZ Paws Walk event happening in Nelson this Saturday, she knew she had to support it.

The fundraiser walk at the Botanic Sports field is encouraging dog owners and supporters to come along to take a stand against animal cruelty.

“This is something I wanted to support as I have a lot of time for the SPCA. They do a tremendous amount of work for animals that are not so fortunate. Hopefully it will be a good turn out.”

Nala is Sandra’s second dog from the Nelson SPCA. She adopted her first in the early 1990s when her children were young and says she wouldn’t go anywhere else.

“I’ve always been very supportive of the SPCA and the marvellous job they do, so that was my first port of call. I wanted to have a rescue dog. I wanted to be able to give a dog a home.

“They have a wonderful scheme in that when you adopt a dog, you have them for a couple of weeks on trial to make sure you’re both happy with each other – and she was never going to go back.”

Nala was originally called Olive, but Sandra wasn’t so keen on the name – which happened to be her grandmother’s.

“I chose Nala from The Lion King because the little lioness had lovely black eyes. Nala’s always got her eye makeup on.” 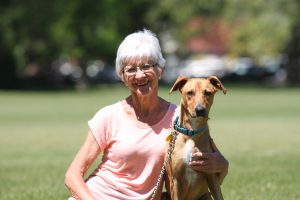 Sandra has no idea what breeds she is made up of, so when people ask she says Nala is her “SPCA special”.

The SPCA aims to raise at least $150,000 nationwide through the fundraiser and to get involved participants must set up a fundraising page, ask their friends and family to sponsor them and join the walk.

The Great NZ Paws Walk is on this Saturday, 9 November from 9:30am – 11am at the Botanic Sports Field (Centre of NZ Park). For more info and to register, go to www.greatpawswalk.co.nz