More people, helicopters and heavy machinery are arriving into the region this afternoon to fight the still-blazing bush fire south of Nelson.

Civil Defence group controller Roger Ball says the response team still has some major challenges ahead of it “however, we’re throwing a lot of resource at it”. That includes almost 20 helicopters, a dozen fire crews, forestry crews, Department of Conservation staff, Red Cross, Urban Search and Rescue and more.

“At this point our focus today is – aside from protecting life and property – to mobilise resource. We’re calling in additional response teams, machinery and just now a [New Zealand Defence Force] team from Woodbourne is arriving. We will also be asking for additional military support.”

He says that environmental conditions have improved but he couldn’t give any more information on how the fire was spreading.

The fire has now stretched over 1900 hectares, making it the biggest fire the region has seen in almost 40 years.

Incident controller Ian Reade of Fire and Emergency NZ, said this morning that there was “extreme fire behaviour” overnight and no way that it could have been stopped.

“So we shifted people out of harms way.”

Ian says the number of homes affected by the fire is unknown as many of the areas are too smoky and risky to access.

Water is being taken from water points in the region but Ian said that supply was low and “one of our challenges”.

He says water can be taken from the sea but it is too far away at this stage.

Zane Hooper, of Nelson Bays Police, says around 150 homes have been evacuated, with more to come today.

“Everyone that evacuates, we’re asking them to go to the St John Church in Wakefield and record your details so we can have a running log of where people are and how to get in touch with them.”

He says they’ve had “absolute cooperation” from members of the public, including home-owners. 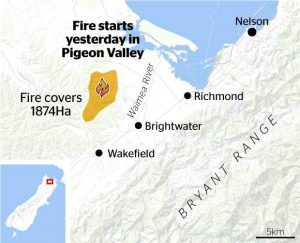 Northerly winds this morning has slowed the fire’s progress after yesterday’s strong southerly conditions. While the temperatures today will be lower than recently experienced, the wind is expected to build from the north as the day progresses.

The fire started shortly after 2pm on Tuesday in Pigeon Valley, near Wakefield and quickly spread, most of it through forests owned by Tasman Pine, although Ian said some smaller private blocks are also affected.

The fire has been spreading rapidly due to dry conditions in the region and strong winds late on Tuesday.

Tasman Mayor Richard Kempthorne said the fire was devastating for the community.

“It’s a wicked fire and we’ve got exceptionally dry forestry and there’s been a strong wind blowing which has just whipped it through,” he said.

“It’s covered quite a lot of ground and it’s really a very unpleasant fire, so it’s really quite impactful.”

Late on Tuesday night a Fire and Emergency NZ spokesperson said the strong winds that afternoon had been fanning the forest, which has led to the fire creating its own extreme fire behaviour.

“Due to this, crews have not been able to access the forest areas and are instead focusing on controlling the fire when it’s spotted onto grassland.”

A fire investigator was on the scene today to ascertain the cause of the blaze but it is not thought to be suspicious and there have been no reports of injuries.

Do you have any information on the fire, or are you near it? If so email news@nelsonapp.co.nz

Lockdown does not dampen school results

Giving up on Nelson’s housing market