Another fire which broke out on a city hill this afternoon has been brought under control.

The Tasman Fire Service says the fire was contained just before 4.30pm this afternoon.

Firefighters sent several aircraft and 10 appliances to battle the blaze with land-based firefighters dampening down ground around nearby houses.

Deputy principal rural fire officer Jeff White says when he got the call, he had an “oh s***” moment.

“Just with the weather and the closeness of the houses, it’s dry and volatile with a steep slope.”

Luckily, the fire was contained but crews will remain in the area dampening down hotspots over the next couple of days.

He says it is not yet clear what caused the fire.

An eye-witness to a fire believes foul play was behind it.

Shane Paratene was one of the first people on the scene.

“Somebody lit the bastard, saw it take off, and me and my boy went up the hill with a bucket.”

Police say they will advise local residents if they need to evacuate but dozens of homes and businesses have already self-evacuated.

A witness who works nearby who has been evacuated says the blaze sparked up a little after 2.30 this afternoon.

“One of the girls saw smoke and we got a call shortly afterwards to evacuate.

“It’s a big blaze, there are five helicopters here.”

“The wind just caught it.”

Reports say that flames have come within five metres of several homes.

It’s the third fire that has hit the region in days.

The first and most serious started on Tuesday in Pigeon Valley and is still raging, currently threatening homes in Wakefield.

The second was started on Rabbit Island on Wednesday, it was deemed suspicious but is now out. 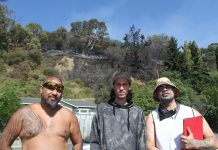 FIRE: What you need to know today