The champions of Nelson netball will be decided this Sunday afternoon.

Jacks OPD and Prices Pharmacy will reignite their storied rivalry when they meet in the 2018 Nelson premier netball final at Saxton Stadium.

Prices Pharmacy took full advantage of their play-off lifeline, defeating Stoke NBS on Saturday to earn their spot in the premier final.

Prices defeated Stoke 63-52 to set up a rematch of their thrilling one-point loss to Jacks in the first semi-final last Thursday night.

Jacks captain Jess Drummond says her side will need to be on top of their game if the are to repeat their 2017 triumph.

“I watched that semi, Prices were on form and will no doubt be like that against us.”

Jacks star shooter Rayna Olsen is in doubt for the final after limping off in the semi with a calf complaint.

“I definitely know there will be some nerves, especially for the girls who have some injury niggles.”’

Should Rayna be ruled out, Ani Waitai will make just her second premier appearance in 2018.

Ani was called into the shooters circle in extra time during the semi-final, nailing all six of her attempts.

The standout centre says while she expects another close encounter, she hopes to get the job done in regulation time.

“I am predicting a hard-fought game with a high chance of it being very close, let’s just hope it’s not over-time close though!”

Jess says Jacks will need to stick to the game plan and do what they do best, contesting the whole 60 minutes with no lull.

“Our goal is to be back to back champs, at the end of the day it will be who performs the best on Sunday afternoon that will secure that win, bring it on!”

Prices captain Shar Lowe says she knows they will need to play an exceptional game to be able to come away with the win.

“We know we’re capable of this so are excited to be playing Jacks who are in form at the moment.”

Shar says the game will be won by the team who makes the least number of errors. This proved the difference in their nail biting 49-48 extra time loss in the semi-final.
She says Prices will have a fully fit squad to choose from, provided there are no flight delays from Christchurch to Nelson.

Their defensive duo of Holly Chandler and Dayna Whiting will be travelling back from the Garden City on Sunday after they compete at the Club Volleyball Nationals.

Jacks and Prices will square off for the title at 1.30pm on Sunday, August 26, at Saxton Stadium.

Sunday’s clash will see a repeat of the 2017 final where Jacks ended Prices two-year reign at the top with a 55-42 victory. 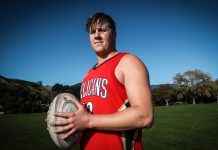 Connor raring to get back to footy

Nelson’s sports stars make the most of lockdown

Powerlifters find strength in each other