Despite the onslaught of nature, up to 400 of New Zealand’s top school triathletes will compete for national glory at Rabbit Island in four weeks in the Tineli National Schools Tri Champs on March 19, 20.

Parts of the proposed run course for the event have been washed into the sea, so a hasty revamp of plans has been necessary, with part of the run now taking place on grass rather than the sealed surface initially planned.

Thanks to the support of Tasman District Council and forestry company PF Olsen, the young triathletes, aged between 10 and 18, will compete on closed roads.

Part of the beach reserve will be closed to ensure safety for competitors and allow for a temporary race village to be set up.

With competitors, parents, teachers and volunteers, up to 1000 people will fill the space while racing takes place.

The next day brings the excitement of team racing as groups of four compete in the Port Nelson team tag triathlon. This relatively new sport will feature in the Commonwealth Games in April and also at the Tokyo Olympics in 2020.

Local sports fans have a chance to be involved, with the organisers seeking more volunteers to help around the course. Local families are asked to open their homes to young athletes by offering billets to out-of-town competitors and possibly their parents.

The organising team has been at work on the event for a year, with more than 100 pages of documentation being produced in the last few weeks.

Race director Peter Gibbs of the Nelson Triathlon Club took over the task in September, when early organiser Alan Bryson stepped up in his swim training job at ASB pool.

Peter was soon joined by Jeni Thornborough, secondary schools sports coordinator for Sports Tasman, bringing together the resources and skills of both organisations.

As part of the buildup, Ironman triathlete Britta Martin has been coaching a small group of school triathletes since November. The Chia Teen Triathlon Training Team is open to budding competitors at 4pm each Monday at Tahunanui reserve.

The next step in the buildup is the Port Nelson Schools Triathlon on Tuesday, 6 March. This regional event for schools from Buller across to Marlborough has also attracted entrants from the North Island anxious to experience racing on the national course.

As well as Tineli, Port Nelson, Nelson Bays Suzuki and Chia, other Nelson businesses to give major support include Village Cycles, who will be at the venue providing checks and repairs, and Sujon. A highlight of the event will be the draw for a new Suzuki Swift. One competitor from each of Triathlon NZ’s national championship races over the season will line up beside one lucky athlete from the Rabbit Island event to be in a six way draw for the big prize.

More information at nzschoolstri2018.co.nz or by emailing [email protected]

Locals asked to ‘walk the chalk’ 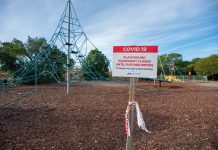 No new Covid-19 cases in Nelson for a week and plans...