Rugby fans may cry “fins up” but don’t be surprised if you hear Nelson basketball fans start screaming “Finn’s in”.

New Zealand Breakers and Tall Black star forward Finn Delany has re-signed with the Mike Pero Nelson Giants, it has been announced today.

Finn has been in stellar form for the Breakers in the Australian National Basketball League and the former Nelson College star’s signature is the one Giants’ fans will celebrate the most.

The 6 foot 6 inch power forward joins Kyle Adnam and Tohiraukura Smith-Milner to sign up for the Giants’ 2018 campaign.

Chair of the Giants board Bill Dahlberg says Finn has the ability to play above the ring, making him a crowd favourite.

“In the last few years Finn is showcasing his physical skills and is starting to mature into a very special player and we are really pleased to have him back in a Giants’ uniform, bringing his exiting style to our home fans.” 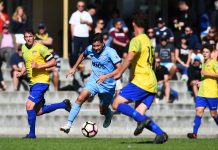 Suburbs first out of the blocks