Government workers were evacuated from level five of Civic House on Thursday after reports of small debris falling from the ceiling, which is likely to have been caused by the Kaikoura earthquake.

Nikki Harrison, group manager of corporate services at Nelson City Council, says a “cosmetic issue”, not related to structural issues, was found in a room occupied by IRD on level five of the building.

“This meant debris was loose in the ceiling space and some of the lightweight ceiling panels had then lifted in the wind, coming through the broken window.”

Nikki says that repairs were completed by the end of Thursday and workers were allowed back in on Friday.

Nelson Weekly last week reported that the clock on Civic House had also stopped in the hours after the Kaikoura earthquake, but has since been fixed.

Civic House has been assessed by structural engineers and deemed to be structurally sound following the earthquake. 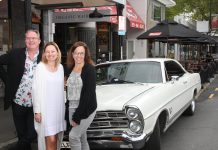