Tasman Bay produced ideal ocean surf ski racing conditions for the 2016 KayakHQ King & Queen of the Bay, where local paddlers dominated the top places in the 17km race from Kaiteriteri to Kina Beach on Sunday.

Sunday produced a northerly wind gusting to 20-knots creating waves for the paddlers to chase and ride, making for exciting and strategic racing.

The seas, though, did add to the level of challenge which stretched some of the field.

The young star of Nelson adventure sport, Cameron Jones, had an exceptional paddle, combining fitness and skill to take line honours and win the race in 1 hour 25 minutes. In the women’s race, Lisa Morrison had a convincing win by mastering the seas and reaching Kina Beach in 1hr 58min.

The doubles race was eventually won by Joe and Jackie MacIntyre, who were tussling for the lead with David Ayre and Naomi Whitehead until the duo stopped to aid a capsised division 4 paddler remount their surfski. David and Naomi were awarded the sportsmanship trophy for their decision.

The Queen and King of the Bay titles are awarded to the fastest paddlers on the stopwatch. In the Queen of the Bay race Morrison took the title and the men’s was won by defending champion and pre-race favourite Hadyn Lockie.

Previous winner Dan Busch pushed Lockie for the first part of the race but in the latter stages the in-form Lockie pulled away to win by a healthy margin.

The 2017 event will be held at the end of summer on a longer course, from Kaiteriteri to Mapua Wharf. Safety Officer for the Tasman Bay Kayak Racing Club, Reid Forrest, commented how well everyone handled the changing conditions and waves. 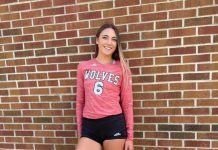 Natasha volleys year in US

Tasman pull off a miracle in Marlborough