Clayton Roeske and Josh Coppins were the best of the Nelson riders at the Nelson Motocross Championships at 88 Valley over the weekend.

While Saturday’s weather held, the overnight downpour made for tricky racing conditions on Sunday, which meant the competition was cut a race short.

Clayton, from Nelson, finished second in the junior feature Dash for Cash to Dunedin’s Grayson Veitch in what was a gripping two-rider shootout.

The lead changed three times in one lap before Grayson won.

The experience of Josh saw him win the senior Dash for Cash as well as win every senior MX I event.

Clayton dominated the 125cc 15 and 16-year-old class while Marshall Phillips from Christchurch won the 12 to 14-year-old 125cc class.

Nelson’s Madi Berry was on the podium for the women’s racing for the weekend, while Nelson’s Luke Heaphy won the mini races.

Race organiser Bryan Heaphy says all the riders did a fantastic job given the conditions on the Sunday.

“It’s very tricky in weather like that and after so much rain to be consistent with your speed, but some of the lap times were terrific.

“We had to change some things around in terms of the course as it was quite boggy and wet in parts, but I think everyone enjoyed themselves.

Bryan says more than 140 riders competed in 13 race categories, including several current and former national champions keen to test themselves on the redesigned track.

The next major event will be the Top of the South Secondary Schools Motocross Championships at the same venue on August 21.

Connor raring to get back to footy 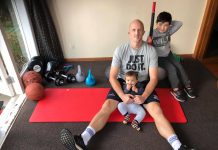 Nelson’s sports stars make the most of lockdown

FC Nelson through after stunning win

Top of the South Speedway