A group of graduating doctors say their year at Nelson Hospital will make them better at their job – which is good news considering more than half are staying on after their graduation.

Of the seven who were completing their sixth, and final, year of medical training in Nelson, four have accepted jobs here. They say doing the final year on-the-job is a great way of putting their book work into practice, while being supervised by more experienced doctors.

Student doctors can be a burden for busy doctors in bigger hospitals – not in Nelson. The graduating doctors say it is the perfect place to learn.

“The reason that a lot of us chose to come here is that it’s very hands-on,” says one of the graduating doctors, Rachel Lines.

“Everywhere you go is based on learning to be a doctor and doing everything that a doctor is doing. But here [Nelson] you get to do a lot more and it’s a lot more hands-on. Everyone knows everyone.”

The student doctors celebrated their impending graduation from Christchurch Clinical School with a dinner on Friday night. In two weeks they will be fully qualified. Frances Riley is the only one of the group who is originally from Nelson, after attending Riwaka Primary School and Waimea College.

She says the doctors and patients in Nelson have made the year enjoyable. “We’re very grateful to all the people in Nelson who don’t mind having a student as part of their team. We wouldn’t have got the skills that if they didn’t let us. Most patients were really happy to let us be a part of it.”

Dr Don Wilson says the students aren’t the only benefactors. “We’ve done surveys, and staff enjoy being kept on their toes a wee bit and being kept up-to-date. I think having them here does raise the standards.”

Another graduate, William Ladyman says it can be a tough year, with concerns about the job. “There are moments where I feel like I have no clue what I’m doing and wonder if it’s for me. Sometimes you lay awake at midnight and think ‘why am I doing this?’ But at the same time you have some really good interactions with both staff and patients. The staff here are really brilliant at getting us involved and they’re really friendly. But on the whole – and I think for all of us – we’ve really enjoyed the year here in Nelson.”

The students also handed out teaching awards to Dr Catherine White and Dr Monique Stravens, who they judged as the most helpful staff doctors over the year. 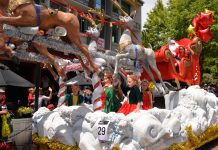