Nayland College started well in its Grade 1 game against Rival Cougars despite being without key defender Sara Reidie. The teams were tied at eight apiece at the first break.

Rival lifted in the second period while unforced errors crept into Nayland’s game.  With Rival goal keep, Kim Loftus out with a season ending knee injury replacement Anna Allen “clicked” with Erin Hartley to form an effective defensive partnership.  With pressure from the outside of the circle Rival made life difficult for the college shooters as it went into the major break 18-15 up.

Rival made changes to its mid court, with Dana Weir moving to wing defence for a “Player of the Day” performance, Rebekah Shepherd to wing attack while Lisa Thompson was introduced off the bench.  The hard working trio stifled Nayland’s attack and were fast to any wayward pass.

Rival’s shooter, Renee Bouizard well and truly had her radar switched on as she played the perfect game with a 100 per cent shooting average, while she was ably assisted by Justine Stebbings with 78 per cent to take the score to 29-21 with ten minutes to play.

Nayland left their best until last, when they outscored Rival 9-8 in the final stanza. Centre, Michaela Matenga led her troops by example – she pulled in a number of intercepts and toiled to get to circle edge for the optimum feed.  Becky Green at goal attack, worked the circle while Saskia Wanklin made an impression when she made a seamless transition from her customary role on the wing to goal defence.

Although Nayland worked hard to create the turnover, it was not always able to be converted as it struggled to break Rival’s zone defence.  More pre-movement to drive onto the ball could well have paid dividends for the college team.

Rival coach, Diane Whittle said she was impressed with her charges, as they had played a lovely game.  It was pleasing to see the girls putting into practise what they had done at training – they had worked on screens during the week and they were effective as they “put them on” all through the court.  Although it was not a “fault free” performance they are all working hard to lift each week, with a possible promotion the ultimate prize. 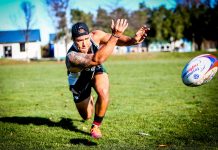 Cleve gears up for big return 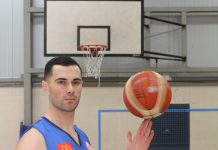 From top fan to newest player